A Few Things Before We Go Cruisin'

I flew home Wednesday and had my routine scan and blood work Thursday.  I then went to MSTI Nampa to have my dressing changed and as soon as I got there the nurse asked to look at my eyes.  He had just gotten a call from Boise MSTI that my Hemoglobin was low and that I needed to have a blood transfusion.  Um no wonder I've been vomiting in dressing rooms, in the parking lot at Costco and other entities.  I finally get it, when my heart rate goes up, I get short of breath and start vomiting with even the slightest exertion it means I need a transfusion.  I'm pretty sure I had other plans for my day, actually I was going to have lunch with Alisha, but that changed rather quickly.  Instead I had a date on the 4th floor with my amazing nurses, one of which was recently diagnosed and treated for breast cancer (she actually is positive for BRCA1 and 2 which is rare) and one who took care of me when I was really sick.  I was the only one there.  It was kind of nice to have their one on one attention and to talk freely.  Every time I get blood I think about the people who took the time to donate for me.  I'm so grateful for them.  Someday I hope that I will know who they are and can thank them personally.  It is such a gift that I can't live without. 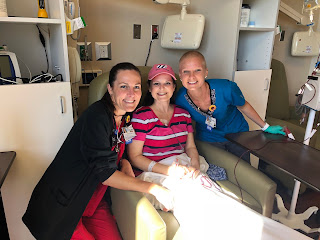 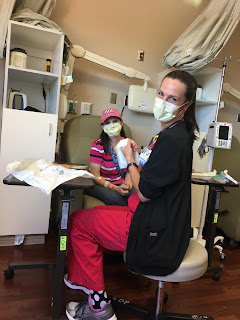 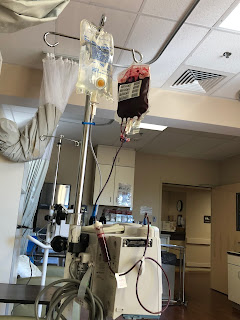 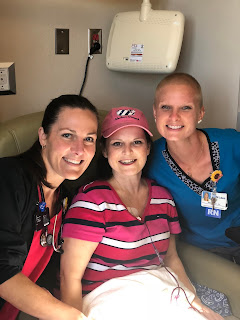 Yesterday I visited Dr. Dan and reviewed my scan.  Unfortunately there is some growth from my scan in March, especially the one on the vaginal anal wall, the mass in the upper abdomen and some new spots on the liver.  But there was also some tumors in the lungs that shrunk.  We decided that we would stay on tamoxifen and start cytoxan which is an oral chemo.  It has been quite a while since I have been on chemo.  Thankfully I won't lose my hair on this.  However, I am getting really tired of the bone pain that is caused from the tamoxifen.  My hips and thighs feel like I've been hit with a baseball bat.  Unfortunately the long acting pain medication isn't really helping my spine pain.  I feel like I'm counting down the hours until I can take my next short acting pain medication.  Of course I had to visit nurse Pat while I was there.  I will be so sad when she retires in October.  She is one of the only nurses who can actually get my port to work. 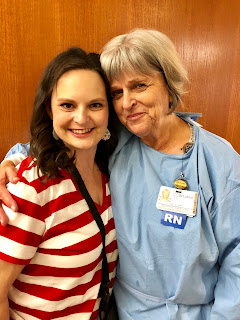 The kids came over for a little swimming today.  Unfortunately I'm not really allowed to swim with this lovely back jewelry.  I'm sure I will from time to time, but not today.  It is always fun to watch the kids swim though. 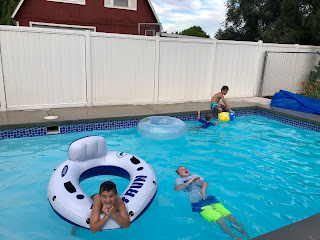 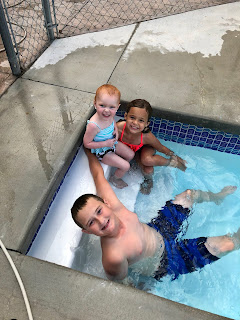 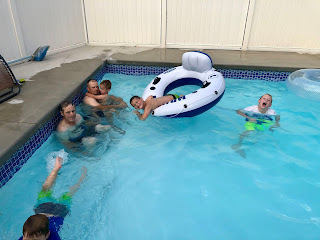 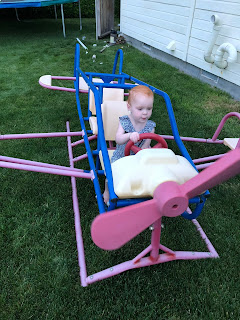 Dad and mom always want to get rid of this airplane, but I keep reminding them how much fun the kids have on it. 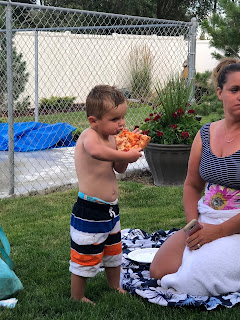 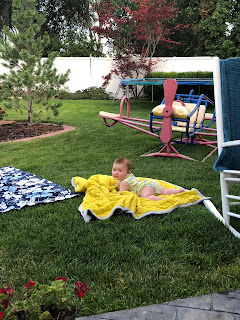 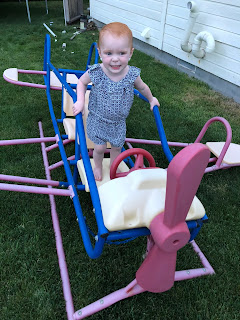 The rest of this evening was spent packing and getting ready for our big Alaskan Cruise.  We leave tomorrow!  I can't wait.  I've heard this is a trip of a lifetime.  I guess we shall see!
at July 14, 2018 No comments:

I returned to Phoenix on June 19, yes the day after my stint removal.  I was sore, so very sore.  I thought I'd bounce back quickly, actually I wasn't sore from the stint removal but from the nephrostomy tube placement.  I returned home so that I could work.  Ha, well that was what I'd hoped.  Thankfully I work with amazing people who help me and limit my patient load.  I had expected to work more, but that didn't happen.  On the 24th, I had come home from church and my bandage was leaking.  I had the tube over my shoulder waiting for my neighbor who is a hospice nurse to come help me change this.  Well, somehow someway the tube caught on the door handle and came completely out, therefore causing urine to dribble down my back.  UGH!  I called Dr. D asking if there was something I could do besides go to the ER.  I was out of luck, she sent me to the ED.  The Chandler ER is fantastic.  They got me in quickly and the Dr. and nurses were so kind.  Unfortunately, the interventional radiologist had just started on a case so I wasn't going to be able to get this fixed for a few hours. They had a very difficult time getting it in, because it had been several hours that it had been out.  The IR said he would try one more time, but that if it didn't work I'd have to come back the next day and they'd have to kind of start all over.  I said a very quick prayer and seconds later it was in!  The IR said that it was luck, I told him I said a prayer and that it was a blessing.  I thought I was sore before, I was really sore after all the poking and prodding.

My good friends Blake and Nicole and baby Hadley have been staying at my house since the beginning of June.  Blake got into PA school in Miami and their lease was up the end of May and they weren't needing to be in Miami until mid August.  I was happy to have them stay in my home.  They thought I was a blessing to them, but I know that Heavenly Father knew that I was going to need them more than they needed me.  They have been such a huge blessing, taking me to the ER when the tube came out, Nicole has been my nurse at odd times when the dressing needed changed, we've cooked a few meals together.   They have literally been my angels.  The greatest part is that Blake has taken out the garbage's; one of the things I despise doing.  I have especially enjoyed having their 6 month old baby in my home.  I can't believe the beautiful spirit that is here with her being so fresh from Heaven.

On June 23 I went with my friend Danelle and her family up to Prescott.  It was so much fun.  We went for a bluegrass festival that Ryan Shupe and the Rubberband were playing at.  It was so nice to be up there with a breeze and only in the 80's instead of 115.  We were only there for a few hours, but it was such a fun day.

I've had a few bowel obstructions since I've been home.  They hurt so badly, but they eventually resolve after 24 hours.  I'm grateful that Blake has been here to give me blessings.  I've been puking lately when I hardly do any exertion.  It is so strange.  It has happened in parking lots and dressing rooms.  I do feel better after puking, which is a plus.

4th of July weekend I went with Laura and Jesse and Gordan and Leslie up to the mountains of Heber, AZ.  It was so nice yet again to get away from the heat and to even have a few rain storms.  We went up on Thursday evening, that day I had another vomiting episode and then a headache that night.  I thought it was strange, since I don't typically get headaches.  I woke with the headache the next morning and then developed chills and a fever and body aches.  It was one of the worst fever and chills I've ever had.  Thankfully I had been given an antibiotic in the ER from the tube coming out, but hadn't taken it.  So I started taking it and by Saturday morning I was feeling a little better.  I don't know what it was, but it felt like I was septic.  Jennifer and her family came up for the day, so I ended up going home with them that night, expecting the same symptoms Saturday evening, but they didn't happen and all of a sudden I was better.  Gordan had given me a blessing and in it had told me that I wasn't finished with my journey on earth.  That was reassuring.  Saturday morning I was sitting on the porch, smelling bacon and breakfast as it was being made.  For a few minutes I felt Grandma and Grandpa Young with me.  They loved the mountains and breakfast. 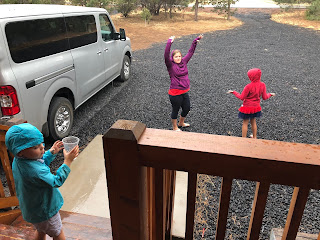 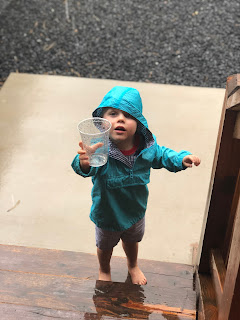 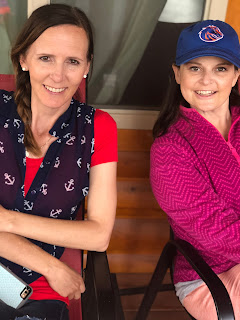 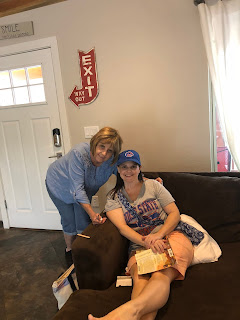 I leave tomorrow to go back to Nampa.  Its been a crazy few weeks.  Hoping I feel better and back to my normal, whatever normal is.
at July 10, 2018 No comments: 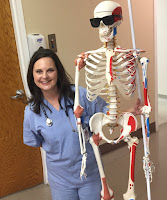 Terah
I'm a daughter, sister, favorite auntie, friend, physician assistant, lover of candy, tulips, fruit, a good salad, traveling adventures, a good book, style, flip flops, spinach shakes, Boise State Football and cooking, who happened to be diagnosed with Ovarian Cancer in June 2013 and will fight like no other to live a positive, happy, vibracious, exciting life as a survivor and overcomer!